Recycling is a hot item these days. They’re right, correctly depositing your waste is an important step in the right direction. Coca Cola European Partners Belgium highlighted this in its latest recycling campaign. They developed a brand-new, fully automated garbage bin that stimulates and rewards recycling. For technological assistance, CCEP partnered up with Coupontools. We were very excited when they reached out to us. Here’s how we contributed to their recycling campaign! 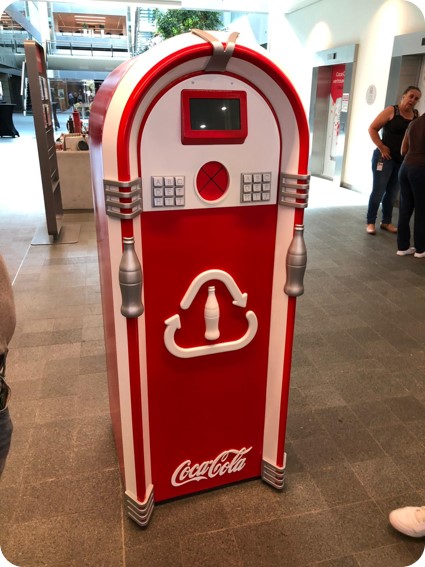 Coupontools took care of the technological system of the garbage bin. The system functioned like this: When someone deposited a Coca Cola bottle or can in the automated garbage bin, a QR-code popped up at the screen of the bin. The person scanned the QR-code and was to a ‘Scratch & Win’ Coupon by which a movie ticket could be won. If the player won a Cinema ticket, basic personal details were asked in order to receive their reward. The ticket was automatically sent to the winner’s email address.

Unfortunately, not every user won a prize, but the chance to win was an important trigger to deposit the bottles and stimulate recycling correctly.

Their approach was to reward desirable behavior with a fun game, experience, and in some cases, a reward. It was a massive trigger for the people to deposit their waste correctly. It was a typical Phygital Campaign. The automated waste bin was located at a physical location, a festival. People who deposited their cans and bottles were offered a digital ‘Scratch&win’ coupon with a chance to win a reward. They chose intentionally for a digital experience. It’s better for the environment and enables more possibilities for fun experiences, data capture, and participation analysis.

If won, cinema ticket automatically sent to the winner.

Others also read
these stories

PepsiCo boosted up Round Table Pizza sales with gamified coupons from Coupontools.

Melvita was interested in using a durable coupon solution:

Dave & Buster's is a restaurant and entertainment chain with 137 locations across the United States.